Interesting story – what´s behind it?

„The stolen Leibniz-biscuit: Newspaper receives claim of responsibility from the „Cookie Monster“ („Gestohlener Leibniz-Keks: Zeitung bekommt Bekennerschreiben vom “Krümelmonster”) – this is the headline of an article in the German newspaper Spiegel online. The article tells the readers an interesting story about a golden cookie which adorned the headquarter of the Bahlsen Company (cookie company) in Hannover/Germany and which was stolen in order to blackmail the company. The blackmailing letter received by the newspaper HAZ was signed by the Cookie Monster, who claimed Leibniz-biscuits for sick children and a donation of 1000 euro for an animal shelter. 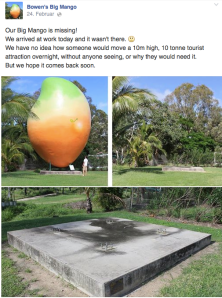 Besides the fact that the both objects were missing there was another thing both stories had in common: the marketing effect. The missing Mango became quickly one of the top topics in Australia and throughout Germany everybody was suddenly talking about the missing cookie. So the question is: What made it possible, that these stories spread like wildfire? Or is it better to say they have gone viral?

Social Media – that’s how it works

The huge impact of the WWW on marketing and advertising is beyond question. With the advent of new communication ways new strategies how to achieve the marketing objectives came along. One of the main ideas of the viral marketing, as its name implies, is a very quick diffusion of messages, analogous to the spread of viruses. The social media suits excellently to achieve this “viral” effect. According to Jeff Lyon (“Viral Marketing” Chicago Tribune Magazine) people who are happy with a product or service tell about it to three people. Multiplied with the number of users of social network sites this results in a huge number of sharings.

The Bowen’s Big Mango Facebook page was launched in the morning when the fruit was „stolen“. It got about 5000 likes and reached about 500,000 people within 24 hours. According to www.whichfranchise.net.au the total reach of the campaign across combined social media channels was in the millions and even Colin Barnett, WA Premier, tweeted about it. Moreover there are lots of videos on YouTube viewed by thousands of people. The “Nando’s reveals Big Mango Mystery“ video for example counts over 280,000 views.

Connecting the online and offline

Of course social media was not the only channel in spreading the messages. The mass media, particularly newspapers, made its contribution for such a big range of these events. So it was very helpful for both campaigns that prominent newspapers (for example Spiegel online in Germany and the Sydney Morning Herald in Australia) promoted the spread of the campaigns in social networks by their enormous reach. On the other hand the newspaper articles were also diligently shared within social media. So the role of the social media in viral marketing cannot be underestimated.

Well, the viral marketing uses primarily social media channels to diffuse a message. Supported by other channels of diffusion, the viral effect can decrease dramatically. But why exactly campaigns such as Leibnitz-cookie and big mango resonate within a large audience? What makes people push that “Like”-Button or share the newspaper article on his or hers Facebook page? In the case of the Cookie Monster who had stolen the Leibnitz-Cookie it was probably the sympathy. The favourite cartoon character from our childhood, the good intentions of his “crime”, everything seems to revolve around children, childhood and kindness. On the other hand the suspense is an issue in both campaigns. How can such a big mango just vanish and who would do things like that? People want to know, what’s behind the story. That’s the affective impact of the campaign. Furthermore both campaigns are new and original (Except the fact that the Mango Campaign took place after the Cookie campaign. But due to the geographical aspect, the campaign was new within the country.) So both campaigns are novel and memorable. In other words: Both examples of the viral marketing are not the kind of advertising that is annoying or is just ignored. Like in traditional advertising the creativity is what attracts and holds people’s attention and leads to an action – share, like, follow.

Like the advent of social media has led to the appearance of new forms of promotion such as viral marketing, the changes in the social media landscape and the growth of mobile media and apps will probably give other interesting ways to create „untraditional“ advertising.